The story of the
Y-INDIAN PROGRAM MEDALLIONS

In the Spring of 1971, Little Eagle (Andy Stone), and his father, Big Eagle
(Charlie Stone), of the Mohican Tribe of the Lexington, Kentucky, YMCA Y-Indian Guides, were about to leave the program because Little Eagle had reached the maximum age for little brave participation. Andy and his dad had truly become "Pals Forever" during their four years in the Y-Indian Guides, and they would always treasure the memories they had made.

Charlie, then a commercial photographer, was making a photo of a commemorative medal for the United States Postal Service when he had the idea. Photos and paintings of American Indians sometimes showed them wearing a leather, bone or stone medallion around their necks. Why not make a commemorative medallion for Y-Indian Guides? It could be a part of a little brave's costume while he is in the program and later become a keepsake for mom or dad.

Andy and Charlie presented the idea to the board of directors of the Lexington, Kentucky, YMCA, who then voted to sponsor the program as a fund raising project, and the first Pals Forever Medallion was struck in September of 1971.

Photo shows Andy and his dad discussing
the medallion with Lexington YMCA Director Shirley Smith.
In raised relief on the front of the medallion is a father and son in full Native American costume. The scene is from a photo of Chief Big Boulder (Jerry Walters) of the Lexington Y-Guide Mohican Tribe and his son, Little Boulder (James), taken at a campfire ceremony, and the idea was to illustrate the common interest in American Indian lore shared by both father and son. The words Y-Indian Guides and Father and Son completed the image, but it was only half the story.

On the reverse was an activity scene, showing a father and son in a canoe. They are dressed in everyday clothes rather than Indian attire. This was to stress that the companionship fostered by Y-Indian Guide experience carries over to other aspects of the boy's life with his father. (In 1971, only fathers and sons participated in the program.)

The slogan of the Y-Indian Guides program, "Pals Forever", is found at the bottom of the circle under the activity scene. To complete the story, and make it a very personal keepsake, a flat space around the medal, above the slogan, can be engraved with a personal message, usually the name 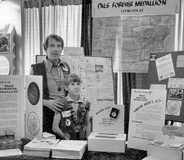 s of child and parent.

exhibit at the Pittsburgh Y-Indian

For the first 14 years the activity scene on the reverse was changed and dated each year. In 1985, to eliminate the need to have expensive new dies cut each year, the reverse of the Pals Forever Medallion was standardized with a scene of a little dancing Indian Brave. In a circle around the little brave is a little story, told in American Indian sign language, of a child's journey through life with a parent. The medallion carries that scene today.

In later years, as the Y-Indian Guide concept expanded to include mothers and daughters, new medallions were struck for Y-Indian Braves (mother and son), Y-Indian

The Y-Indian Braves (mother and son) medallion carries the shame reverse scene as the Pals Forever Medallion. The Maiden and Princess medallions have a similar scene on the reverse, but depicting a little dancing Indian girl.

Because of the increasing popularity of the Y-Indian Programs, these medallions have been as much in demand as the original Pals Forever Medallion.

And finally, the Trails Together Medallion for the Y-Indian Family programs completed the set. This medallion has the YMCA Trails Together logo on the front and a family group on the reverse. It can also be personally engraved

This photo shows the famous Cherokee, Sequoia, with his alphabet. Sequoia was the first person in the history of man to invent an alphabet for a spoken language where no alphabet had existed. He went on to teach his people the language and eventually he published a newspaper for them. Sequoia wears a medallion given to him by his people in honor of his achievement.
. Back toMAIN PAGE
Y-Indian Program Medallions, 100 Clegg St., Walden, TN 37377
888-222-8228 or 423-886-2721 - Fax 423-886-4969